The Swiss vote on monetary reform on 10 June. A “Yes” to Vollgeld is a low-probability, but a high-impact event. Ring any Brexit bells?Â

Vollgeld: a Brexit-sized referendum in the Alps

On 10 June, the Swiss vote on â€œVollgeldâ€. This referendum asks whether the Swiss want to reform their monetary system in a fundamental and unprecedented way. The referendum has largely remained under the radar outside of Switzerland. That may, however, be a mistake. Recent polls indicate a rejection is not a done deal.Â A “Yes” would first herald a period of great uncertainty, in which the Swiss Franc could suffer. In the longer term, more expensive and scarce credit hurt the economy, but the franc may benefit from deflationary policies.

A rejection is not a done deal

Moreover, the Brexit referendum of 2016 should have taught the forecast community some modesty. And the louder â€œthe expertsâ€ recommend to stay away from something, the more inclined people appear to gravitate towards it. After all, to paraphrase a BritishÂ minister during the Brexit campaign, â€œpeople have had enough of expertsâ€. In Switzerland too, the â€œeliteâ€, including the government, the Swiss central bank (SNB), the banks and a number of scholars, have come out against Vollgeld. If only for that reason, a â€œYesâ€ vote should not be excluded â€“ although to be clear, a rejection remains our base case.

What is this Vollgeld and why should I care?

Which brings us to the impact. Here too, an important parallel with Brexit is that a â€œYesâ€ would herald a period of uncertainty. In short, Vollgeld would convert commercial bank deposits into SNB liabilities, temporarily replacing the gap on commercial bank balance sheets with SNB loans. Commercial banks would then no longer be allowed to create money when lending.

This basically reverses the order for banks. Currently, they can lend and worry about funding the loan later. Under Vollgeld, they first have to collect the funds, and can then go on and lend these afterwards. That sounds like a simple tweak, but it has big consequences.Â Vollgeld and various alternatives have been debated among economists for many years. But it has never really been tried â€“ let alone in a developed economy with a big banking sector which finances 33% of its balance sheet with deposits. 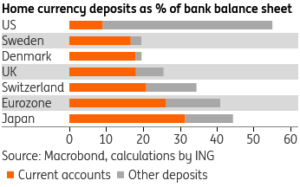 A fundamental reform with wide-ranging consequences

Vollgeld is a complicated monetary reform about which books can be (and have been) written. We shortlist some consequences here. We discuss them at greater length in our main report.

“The [Vollgeld] initiative raises unrealistic expectations… [it] is an unnecessary and dangerous experiment”
Thomas Jordan, SNB President. The SNB on Vollgeld (in German)

So what happens after a “Yes”?

Should the Swiss adopt Vollgeld, then (like with Brexit) initially uncertainty will dominate. This would be a negative for the Swiss Franc. In the longer term, Swiss banks and the economy

If adopted, uncertainty will dominate

willÂ suffer from reduced credit. The SNB will findÂ it much more difficult to reverse helicopter money creation than to reverse more traditional monetary policy (raising rates, or selling assets to reverse quantitative easing). Therefore, the central bank will want to avoid creating too much money in the first place and adopt a conservative, deflationary monetary policy. This may be a positive for the franc. The positive effect may be reinforced by the safe haven status provided by Francs held directly at the SNB.

Is a fudge still possible after a “Yes”?

The Vollgeld initiative spells out the changes it wants to see implemented in the law. Yet the follow-up to the Swiss “mass immigration” referendum (which the EU judged to be a violation of free movement principles) shows that the Swiss Parliament — which has come out against Vollgeld — may try and water it down. This comes with political risks, though. If Vollgeld is adopted with a great majority, its proponents are likely to call for another referendum if they feel Parliament is not implementing Vollgeld properly. A thin majority, on the other hand, increases political leeway for Parliament to come up with a fudge.