Eurozone bank lending growth is clearly alive, but kicking only very gently. The perfect data release for the ECB, a few hours before it is expected to announce its tapering plans.

As markets are preparing for what could be the most exciting ECB press conference of the year, later today, the ECB released one last important set of data this morning, on monetary and credit developments in the Eurozone. On this front, things are moving along steadily. Bank lending to households was stable at 2.7%YoY in September, with lending to non-financial businesses ticking up slightly to 2.5% from 2.4%. 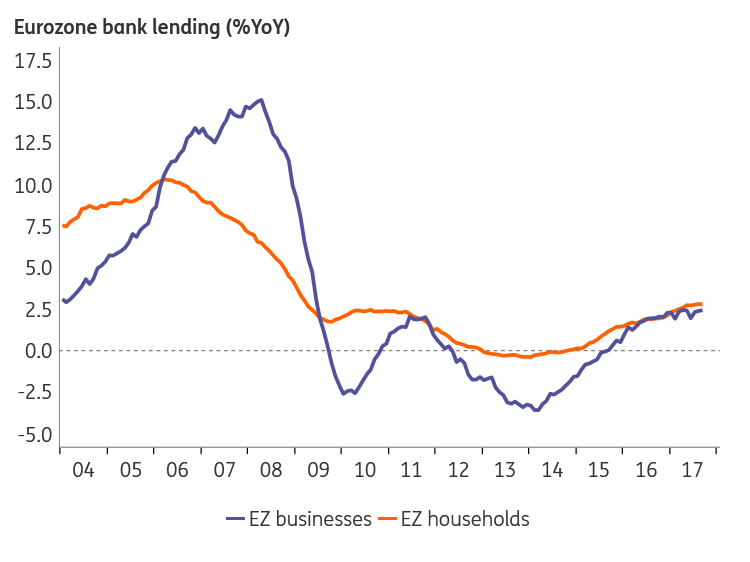 This basically means that bank credit will not be an issue for Draghi this afternoon. The ECB-president can convincingly argue that he has jolted bank lending back to life with QE, TLTRO and negative rates. Back in early 2014, households and businesses were, in net terms, paying off bank loans. But those days of deleveraging appear long off today â€“ at least, for the Eurozone as a whole. Bank lending has been recovering slowly but very steadily over the past two years. To be fair, bank lending growth is still negative in Spain, Portugal, Ireland, Greece and the Netherlands. But in most of these countries, the growth rate is slowly turning less negative. So it may not yet be â€œmission accomplishedâ€ here, but the ECB can certainly claim that its policies have helped to mend bank lending markets, and that things are moving in the right direction.

At the same time, the ECBâ€™s unconventional policies have not led to an outright lending boom. Sure, bank lending growth rates looks a bit exuberant in Belgium (6.8%YoY for households and 8.7% for businesses), and to a lesser extent in France (6.2% for households, 5.5% for businesses). But these growth rates remain single-digit and do not appear to forebode theÂ imminent popping of a bubble. So in sum, monetary and credit developments do not provide any reason to slam the brakes.

In sum, todayâ€™s monetary and credit data enables a gentle â€œlower for longerâ€ tapering message. We expect the ECB to lower monthly purchases to â‚¬25bn while extending them to year-end 2018. At the same time, lack of a credit boom creates room for Draghi to signal that rates will remain low beyond 2018.

Bitcoins are sometimes marketed as a low-cost alternative to traditional payments but they’re not asÂ cheap as you’d think. What’s going on?

A core element of cryptocurrency is the lack of a central authority. Nodes on the network verifyÂ transactions which are rewarded with transaction fees and in the case of bitcoins, newly minted bitcoins go with each verified block of transaction. From the verifying nodes’ perspective, these new bitcoins are mined. Hence they are referred to as “miners”.

As explained in ourÂ report, one of the central issues of cryptocurrencies is trust. How can the rest of the cryptocurrency network trust the verification work done by miners?Â I’d like to call this theÂ Mad Max problem. In a Mad Max world, with no law enforcement, your base assumption has to be that nobody can be trusted. How to do transactions take place in such a world without anyone getting robbed?

For example, malevolent miners could verify blocks of fraudulent transactions in which bitcoin is taken from victims and sent to their own wallets, or where the same bitcoin is spent several times. How do network nodes know that the blocks presented by miners are truly valid?

The innovative concept applied by bitcoin isÂ proof-of-workÂ (POW) system.Â By making sure that verifying transactions is a costly business, the integrity of the network can be preserved as long as benevolent nodes control a majority of computing power. Together, they will dominate the verification (mining) process. Read Satoshi Nakamoto’s original white paper for a more detailed explanationÂ here.

To make the verification (mining) costly, the verification algorithm requires a lot of processing power and thus electricity. In fact, the website Digiconomist has constructed aÂ Bitcoin Energy Consumption Index, estimating bitcoin energy consumption. And the results are sobering. At the time of writing, verifyingÂ one transaction on the bitcoin blockchainÂ consumes about 200kWh.

This number needs some context. 200kWh is enough to run over 200 washing cycles. In fact, it’s enough to run my entire home over four weeks, which consumes about 45Â kWh per week costing â‚¬39Â of electricity (at current Dutch consumer prices).

Let’s put this another way. To process your bitcoin transaction, which might not cost you anything, 200kWh of electricity is used. Powering the entire Bitcoin blockchain currently, costs over 2200MW which is more than what the biggest Dutch energy plant, theÂ EemshavencentraleÂ requires.

This might make you wonder why you’re not chargedÂ â‚¬39Â for theÂ electricity used? The answer isÂ simply the block reward. The miner whose block is selected to be added to the chainÂ currently receives BTC12. At current BTC prices, the block reward clearly and vastly outweighs electricity costs. Mining is a no-brainer for individual miners, but the benefit to society at large is much less obvious. 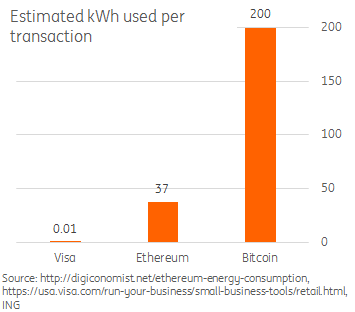 Bitcoin’s energy costs stand in stark contrast to payment systems that have the luxury of working with trusted counterparties. E.g. Visa takes about 0.01kWh (10Wh) per transaction which is 20000 times less energy.

But blockchain technology could be used in a setting withÂ trustedÂ nodes as well,Â for example between banks. And this would abolish the need for expensive proof of work.

But operating in a setting without trusted authorities was one of the core goals of the original bitcoin project. At the same time, the cryptocurrency community isÂ aware of the sheer energy consumptionÂ issue.Â Therefore, it is looking for alternatives solutions to the Mad Max problem.

One alternative may beÂ Proof of Stake. Miners are not asked to show they put in work (computing power) in validating but to commit valuable resources beforehand, indicating they have a stake in theÂ proper outcome. For example, miners may have to put an amount of cryptocurrency in escrow which is only released if no fraud is detected, otherwise forfeited.

That sounds like a smart idea. However, it implies that only those wealthy enough to be able to put resources in escrow can join the mining process. This creates a plutocracy, which sits uncomfortably with cryptocurrency’s anarchistic and libertarian roots.

My conclusion is that finding a sustainable and fair solution to the Mad Max Problem is one of the biggest challenges for the cryptocurrency community today.

This article appeared on THINK.ING.com.